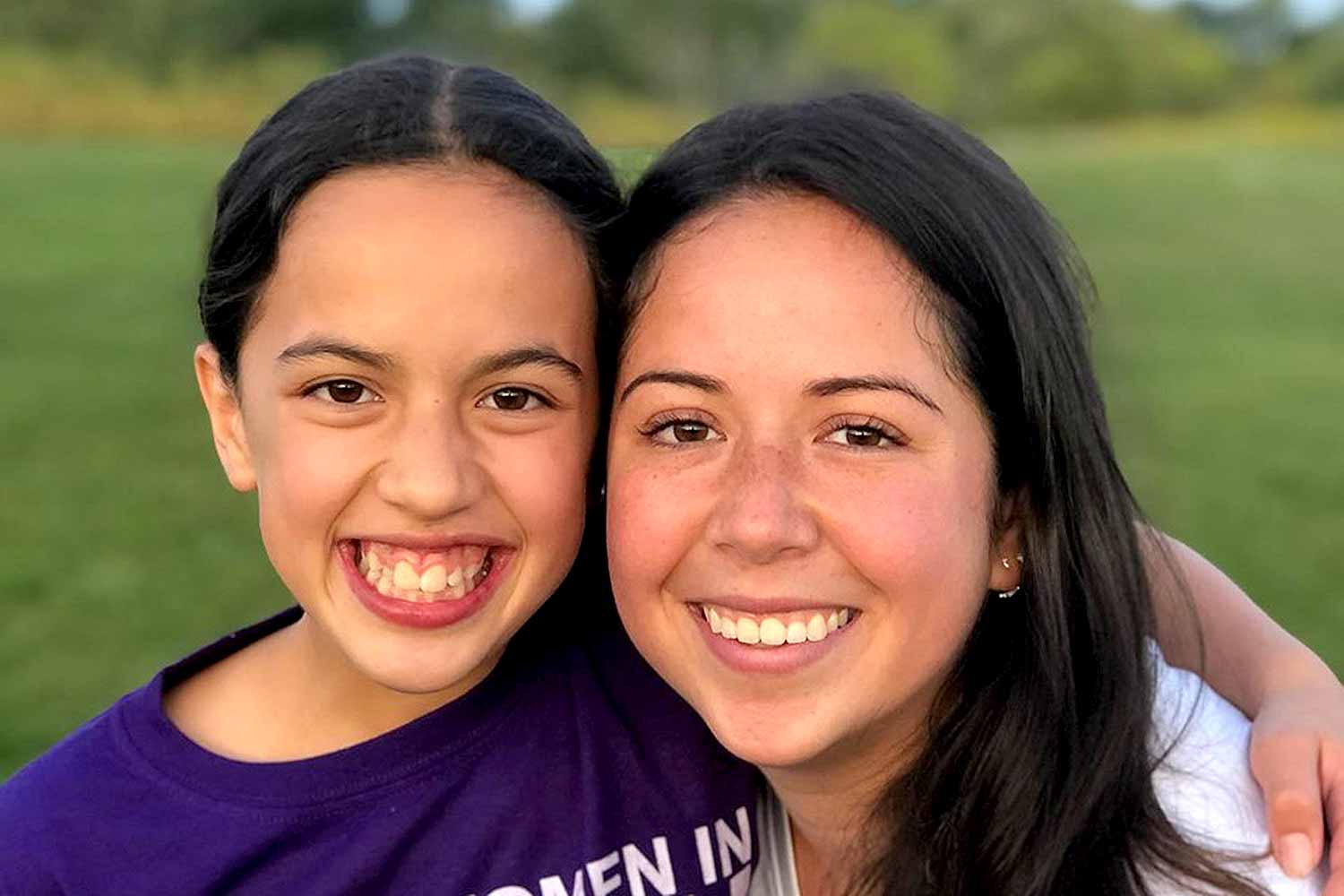 This week is coaches week! To celebrate, we chatted with our very own Gabriela Estrada. She is a key member of our core Fast and Female team. When she isn’t working on event coordination, program development, and research, Gaby is coaching! She gave us a huge amount of insight and wisdom into the world of being a female coach and coaching females.

I am the Events and Research Manager at Fast and Female! I first started off as an ambassador about 2.5 – 3 years ago; then, in 2018, I had the opportunity to be an Event Coordinator for one of the Toronto Jumpstart Events! I had such a great time that I found a way to stick around. As the Events and Research Manager, I oversee almost all of our events in Canada, from our Champ Chats to our Power Hours and a few custom ones! I have the opportunity to work alongside amazing partners and event coordinators. In addition to this, I also lead the research arm of our organization and work with academic partners.

I would say I have coached for about 10-11 years. I started coaching around 18 as a volunteer for a Girls/Women’s soccer organization – I think it was U10 or U12, house league. Since then, I’ve coached anywhere from 18 months to 40-year-olds.

Soccer has been pretty consistent throughout my sports career; I’ve also played field hockey and ultimate frisbee! In terms of coaching, (again) soccer has been consistent – I’ve also coached in multi-sport programs, coached fitness programs, and supported coaching in running programs for students. 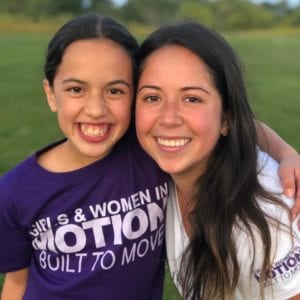 I currently coach a university women’s intramural soccer team – it’s the same team I played for at the same university I went to. It’s incredibly rewarding as we get such a diverse group of athletes coming to tryouts and playing with us! Skill level varies, experiences and fields of study are different so it’s very cool to be able to see the athletes come together to learn and play as one. Very cool.

I also run a girls and women’s soccer program in my area and coach girls, between the ages of 6-12 and women 18+, which can vary from 22-year-olds to 40+. Again, it’s a privilege to see these women come together from different walks of life to be able to learn and play.

I think for me, the first thing was giving back to the community and sharing the knowledge and passion I had; but beyond the community, what really keeps me going is lack of access to programs and teams that are coached and/or led by women. I never had a female soccer coach throughout my years playing and the only time we had a female staff involved, she was more of a trainer than a coach. It’s so important for me to be able to be what I want to see more of in the world. The relationships you also build and the way that you, as a coach, can support your athletes off the field as well is so rewarding. I’ve had the privilege of writing reference letters, meeting family members, being an ear to listen or a shoulder to cry on and it’s truly an honor to be able to have those type of relationships with your athletes.

You can’t coach everyone the same – your coaching philosophy and core values can be the same but the way you approach your team adjusts depending on those you are coaching. You need to be able to create a comfortable and inclusive environment for your athletes to feel safe to learn, build resiliency and grit, get uncomfortable and outside of their comfort zone. Also, even when you have a plan, go into things accepting that things may not always go according to plan: your practice plan or session plan may look pristine on paper but there is a 99% chance that you are going to have to switch things up and scratch things off your paper – and that is okay. Be as prepared as possible but accept that things that you don’t expect may happen. It’s how you react that makes a difference. 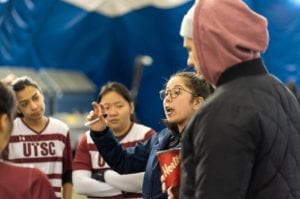 Top three things: 1) The growth you see in your athletes, 100%. Whether its skill or personal growth, it’s beautiful to see. On a skill base, seeing an athlete perfect a pass or score for the first time, execute a play that they’ve been practicing nonstop and then being able to see that joy in their face is incredibly infectious and rewarding. 2) Seeing athletes create community and friendships through sport – individuals that were strangers at the beginning now hanging out after practice, in between games, going to each other’s houses and such. I love the relationship building and it’s so important to be able to create an environment where that can happen. 3) The friendships/relationships that as a coach you build with your athletes and how those evolve when they are no longer your athletes. Some of my previous athletes are now some of my greatest friends; a handful even come back to coach alongside me and find ways to continue to stay involved with the team or in the sport in a leadership role.

The unexpected and the reality that all your athletes have a huge life outside of sport that requires a lot from them – whether it’s school, social life, family, etc. I think finding a way to manage and navigate that, being understanding but still setting boundaries and rules on what their expectation is as an athlete can definitely be a struggle.

The other biggest challenge I face, specifically in coaching my women’s soccer team, is the comparison to other more competitive division/teams and the difference in the way teams and athletes are treated according to their skill level. Here, it comes down to me and any of my co-coaches to create an environment where the athletes feel that regardless of their skill level, they can thrive, are appreciated, celebrated and more.

Breaking it down, it comes to the following:

Firstly, it’s not everything. Winning a game is a great success but losing is an opportunity to learn and grow. It’s where you have to become resilient and gritty and think, “What are our areas of improvement? How can we work together to grow from this?” At the same time, winning is a fantastic feeling but you need to celebrate the little wins as much as you celebrate the big wins – and what I mean by that is celebrate the success of the team in how they’ve learned and grown first before you celebrate the results on the field.

Honestly, no and it’s a very sad and disappointing thing. Beyond my lack of female role models in general, but specifically, as coaches growing up, I wasn’t exposed to or had great access to female coaches in the media and in high-performance sport. This needs to become a norm to be able to find those role models and those mentors. I did have a mentor coach at one point which was beneficial, but they were not a soccer coach which I think became a struggle for me. You can absolutely learn from coaches of all sport in general but it makes a huge difference to have a role model/mentor coach from your own discipline.

I have two: the first one is an activity I play called “head, shoulders, knees and cones,” I play this with all my athletes, regardless of age. You get the girls in pairs, a cone per pair which they place in between them, and call out different body parts that they react and touch (similar to Simon says); when you call cone, you see who reacts the quickest to grab the cone. Its fun, friendly competition, breaks the ice and gets them slightly warmed up. I always add in an introduction (especially if it’s the first time meeting) before they play and get them to know their partner a little more.

The second one is donkey tails, where each participant puts a pinnie in their pant line and has to avoid getting their pinnie taken while trying to take someone else’s pinnie. This one is incredibly for warm-up but, again, for competition and laughter.

Social acceptance, fun, and role models are some of the biggest reasons girls drop out of sports. How do you think coaches can address these issues within their teams?

First of all, be that role model. Be the role model you needed, that you didn’t have, that your friends didn’t have, your sister, etc. Second, grow your athletes to be role models as well; whether it’s amongst their peers or looking for opportunities as a team to volunteer somewhere (especially with your athletes being older) where they can give back to the community but be role models themselves – like being ambassadors at our events or leading a station. And don’t forget to expose them to other role models as well! 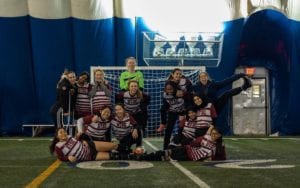 Bring in guest coaches, go to a workshop together, bring in a trainer, etc. – especially if you can bring in female role models for them to learn from. If they can see someone like themselves in a role that they may have never considered an option for them, you can influence more than just their time in that 90 minutes or so.

Beyond this, as a coach, recognize the role that you play in these athlete’s sport experience in their journey. This could be their first time in sport, a stop in their career or, unfortunately, this could be their last experience. What do you need to do, become aware of, be trained and knowledgeable on, to avoid this being their last experience? How do you, alongside your other coaches and the rest of the team, work to create this an environment where these athletes want to be, where they can grow, where they feel a sense of belonging/social acceptance and have fun. Reading reports and findings, tools and such from places like CAAWS and the Tucker Centre or taking the Keeping Girls in Sport certificate, being NCCP certified, SafeTALK – all these professional development opportunities and learning opportunities that make you a much more rounded, prepared coach. 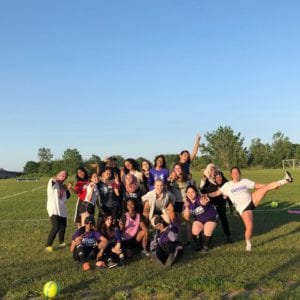 If you can’t see it, be it. Being a coach is so rewarding – and it’s so much more than coaching a game or a practice: it’s being a friend, a role model, an older sister, a teacher and more. Start off volunteer coaching with a local community organization or school – however, do yourself a good favor and register for free NCCP courses and looking into other professional development opportunities to be a better coach. Coaches, regardless of level and discipline, should always be looking to learn and grow.

So, step 1: get involved; step 2: learn; and then step 3: grow, thrive, and create an environment where your athletes can do the same. Remember: you can be their first experience, a stop in their career, or their last. Do what you can to not be their last. And believe in yourself! I do. I believe in you.