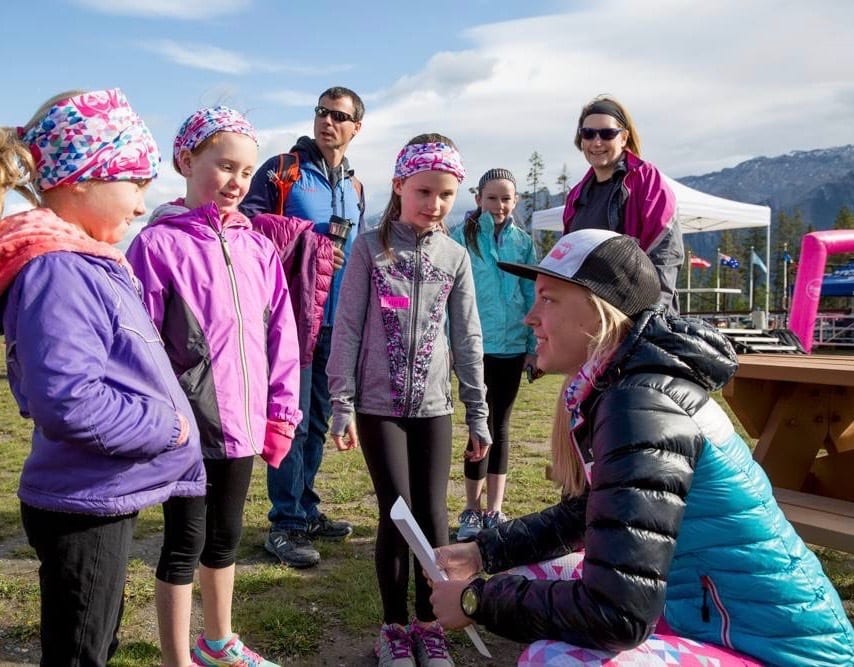 Morgan Rogers is a former Fast and Female participant who has grown from a volunteer and R.E.A.L role model into a core member of our small but mighty team as a Development Coordinator. We’re proud to have played a role in Morgan’s journey and her story is a powerful reminder of the power of sport, role models, and empowerment.

Though Morgan’s story is empowering, hopeful, and above all, authentic (true to our Be You Be Real value), we do want to give our readers a head’s up that Morgan does briefly mention her story of sexual harassment in the workplace. We are proud of Morgan for her strength and resiliency in sharing. To further support our community, we have added a number of support systems and resources at the bottom of the page.

My long and winding road by Morgan Rogers

I began my Fast and Female journey at 9 years old. Along with several ski teammates, I attended the first Canmore F&F event in 2007, after Chandra had won Olympic gold. For years, we continued to attend events as participants in and around Canmore. Early on, the organization was cross-country ski and Canmore-focused. However, over the years it has been great to watch Fast and Female grow and expand to multiple sports and many provinces across Canada.
I personally have attended events in towns across Canada, ranging from Canmore to Whitehorse, to Thunder Bay!

My experiences with F&F have also evolved as I have grown and evolved as a person, which is why I hold the organization and the work so close to my heart. I am a prime example of the power and impact of this charity. Connecting with girls as a role model uncovered my passion for giving back to others and Fast and Female has provided opportunities for some of my big “firsts”. One of my first volunteer positions was running an F&F retail booth as a plucky 14-year-old at a World Cup ski race and at 17, my first-time public speaking experience was at Chandra’s retirement party. I am now incredibly thankful to be learning and growing every day in the world of charity as I work for the organization as a Development Coordinator.

If it weren’t for a conversation I had at a Fast and Female event as a teenager, I would not be sitting in the seat I am right now.

As a grade 12 student, my plan was to stop ski racing, move to Vancouver, study at UBC, and become a doctor. In the fall of 2014 (my grade 12 year), I got the chance to meet F&F superstar Erica Wiebe. Chatting with Erica at the end of the event, she suggested I look into applying to the University of Calgary, as that would allow me to continue skiing for another year while pursuing my education. Of course, when my mom suggested this it was a hard pass, but as soon as a cool role model told me to think about it, I applied that night. I accepted my offer to U of C two weeks later and while studying at U of C, I discovered my passion in sport psychology and have since earned my undergraduate degree in kinesiology. I am currently pursuing a Master’s in sport psychology, supervised by another inimitable female role model, Dr. Penny Werthner.

This is why I am an advocate for having diverse role models from all careers at events – so that other girls can, like me, discover interesting life paths in the wonderful world of sport beyond being an elite athlete.

Fast and Female programming exposes girls to wonderful R.E.A.L. (Relatable, Empowered, Active Leaders) Role Models. They show girls the importance of being a strong, empowered woman, and that we can do anything if we set our mind to it from a young age. Girls also learn about the importance of sport for mental and physical health. I did not realize the power of these lessons until I was older. I learned these lessons explicitly at F&F events, and through exposure to many female role models: my badass mom, my long-time ski coach Kathy Davies, skiing on the coattails of Chandra, Amanda Ammar, Sara Renner (who I now coach with!), and Rhonda Jewett.

I did not identify as a feminist until I was almost 22 years old (I’m only 23 as I write this). But one summer this all changed. After enduring sexual harassment at work and the subsequent experiences of standing up for myself, my worldview changed.
It took something I didn’t know I had inside myself and shifted it to the forefront. It ignited a burning fire for my F&F passion. I liken my journey from a quiet people pleaser to outspoken feminist to that of Taylor Swift’s journey in her documentary – Miss Americana.

Since I have always had exposure to strong role models, standing up to workplace sexual harassment seemed like the obvious choice to me, but I soon learned, however, that it was not going to be easy. I became the proverbial squeaky wheel for being so grounded in my values that women should be treated fairly in the workplace (and in life). I, unfortunately, saw why many women do not report, especially when you are not taken seriously.

This is where the importance of sports comes in. During an extremely stressful time in my life, it was wonderful that I had been exposed to sports as a mental health booster and a positive coping mechanism. Going for a run at the Nordic centre is my number one method to help deal with stress, and it is amazing to have that knowledge in my back pocket as I endure other stressors, such as the COVID-19 pandemic we are all experiencing right now.

I believe in Fast and Female so that all girls can learn from strong female role models who stand up for their values, as well as the power of sports for bolstering your mental and physical health.

My story is long because my journey with Fast and Female has also been long. I will conclude by saying, through adversity, I grew as a person and found my voice and fire in life. The Morgan who is writing this, as a strong feminist who now works at F&F, while studying mental health and resilience as a master’s thesis, exists as a result of very specific circumstances in life.

The largest influencers all go back to my ties with Fast and Female.

I hope to continue with this organization for many years, seeking to provide our participants with the same positive experiences that have shaped who I am today.

Girls in Sports are Empowered for Life

Fast and Female is proud of Morgan for the resiliency and strength in sharing her story. We acknowledge that there are many individuals who are unable to share their story and wanted to provide a number of resources for anyone who may be experiencing or have experienced sexual assault, harassment or violence: